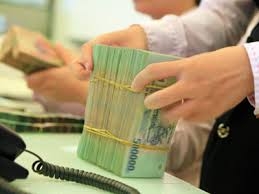 In fact, banks’ mobilising rates slid sharply in the past month.
One month ago, most banks still offered 12 per cent, per year for long-term deposits of at least 12 months, now the rate is mostly pegged at 10.5 per cent, per year which is viewed at diverse banks like Vietcombank, VietinBank, Eximbank, Military Bank (MB) and Vietnam International Bank (VIB).

Besides, over a month ago huge sums (VND10 billion or $476,000) were particularly appeared to banks with mobilising rates reaching 13-14 per cent, per year.
Now, banks’ interest in such deposits is cooling.

“Currently most banks asked their staff to offer a 0.3-0.5 bonus rate per year more to bigger deposits compared to common ones and this needs approval from bank top leaders,” said a credit staff member at a Hanoi bank.

That credit staff also said the mobilising rate lost from 0.2-0.3 per cent per year in the past week and current downward trend would linger on.

State Bank figures show that banking sector credit growth contracted 0.86 per cent in the year to February 21, 2013. That was why in the past months banks have en masse rolled out a series of preferential credit packages to garner customers.

First, banks have to put bigger amounts into loan loss provisioning due to high bad debts.
Second, banks can buy government bonds which fetch from 8-9 per cent yield, per year which help reduce the need to relax lending rate to attract borrowers.

“Banks’ contracted credit forced the government to increase spending on public investment through issuing government bonds to warm up demand. The measure, however, averts lending rate from further going down. Besides, inflation, though being contained, would possibly come back if we lack vigilance,” said Thanh.