The $4.2 billion Ho Tram Strip integrated resort is facing a delay in its opening due to the pull-out of its first resort’s operator and financing problem. 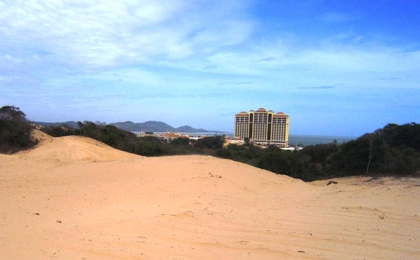 Firstly this week we thought we would showcase the view from the first hole back to the MGM Grand Ho Tram Beach photo:www.hotramstrip.com

Its developer - Asian Coast Development (Canada) Limited (ACDL) - last week announced that MGM Resorts International (MGM) would no longer be able to manage the first of the Ho Tram Strip’s five resorts in Ba Ria-Vung Tau province. The two sides did not revealed reasons for the termination of the agreement which MGM entered into five years ago to provide pre-opening services and to manage the first 1,100 room resort under the MGM Grand Ho Tram Beach brand.

Pinnacle Entertainment Inc, which owns 24 per cent stake in the ACDL, also said in an annual report released on February 13, that certain issues had arisen with respect to the funding of the first out of five resorts for the project due to the delay of the amendments to the Las Vegas-style project’s investment certificate.

“ACDL is reliant upon a $175 million credit facility from a syndicate of Vietnamese banks to fund this first phase of the first resort of its Ho Tram Strip resort project,” Pinnacle noted in the report. “The banks have suspended funding under the credit facility until the amendment to the investment certificate, now pending before the government, has been granted.”

The company stated it had recorded a non-cash write down of the carrying value of its investment in ACDL of approximately $25 million, in consideration of the uncertainty surrounding the timing of the amendment of the investment certificate, related risks associated with such amendment, reinstatement of funding under ACDL’s current credit facility, the subsequent working capital financing needs.

ACDL had announced the first 541-room hotel would be opened early this year but the opening has been delayed.

“The opening of the resort for operations is subject to receiving an amended investment certificate, the resumption of funding by its lenders, a working capital facility, and depending on the length of the delay, additional capital to fund interim operations,” Pinnacle said.

A Ba Ria-Vung Tau Department of Planning and Investment source said the amended investment certificate was related to gaming approval and the construction timeline.

In addition to two hotels and a golf course, the first phase of the project is expected to feature an  entertainment area with 90 live table games and 500 electronic games.