Japanese investors look on bright side

More than two-thirds of Japanese firms operating in Vietnam plan to expand investment in the country over the next two years. 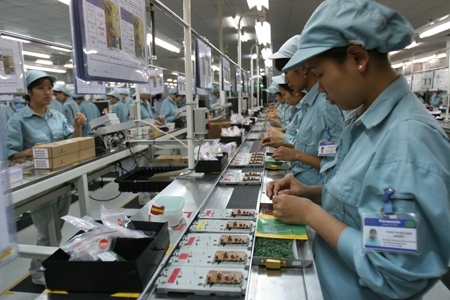 This despite challenges like wage hikes, according to a survey of Japan External Trade Organisation (Jetro).

The survey, released by Jetro Hanoi office last week, points out that 65.9 per cent of Japanese companies operating in Vietnam wanted to continue expanding business in this country in 2013 and 2014, while 32.1 per cent responded they would keep the same size. Only two per cent said they would downsize in Vietnam or relocate to other countries.

Japanese companies’ interest in Vietnam was lower than that of Indonesia, Myanmar and Cambodia, but higher than that of Thailand, China, Malaysia, Singapore and the Philippines.

“Information technology, software, wholesale and retail, chemical and healthcare will be the most interesting industries for Japanese investors to invest in Vietnam,” he said.

According to the survey, the proportion respondents planning for expansion in China at this time was 52.3 per cent, a 14.5 point decline, which was the greatest drop among the surveyed countries or regions.

The main rivals of Vietnam in the investment attraction from Japan were Indonesia and Thailand, which were getting considerable attention from  Japanese firms, said Yamaoka.

Yamaoka said many Japanese firms were concerned they could not recruit enough labour for their investment in Thailand at this time and this was an advantage of Vietnam to attract Japan’s investment.

The business result of Japanese companies in Vietnam last year remained positive, with 60.2 per cent of firms expect to make profit. Meanwhile, 20.3 per cent expected to make a loss, according to Jetro’s survey.

Though the proportion of profitable firms decreased for the third straight year in Vietnam, like in China and Indiana, a business confidence index of Japanese firms in this market improved to 34.2 points, an increase of 13.8 points on-year.

“This is a positive signal for the Vietnamese government to attract investment from Japan,” said Yamaoka.

However, Japanese firms also face challenges in Vietnam, such as rising wages.  According to the survey, Vietnam’s average wage increased 19.7 per cent in 2012, the highest rate among the surveyed countries and regions. And the rate in 2013 is expected to increase 17.5 per cent, also among the highest increases.