The Vietnam Association of Seafood Exporters and Producers (VASEP) has all the necessary evidence to prove that Vietnam’s shrimp producers and exporters do not receive any subsidy from the government. 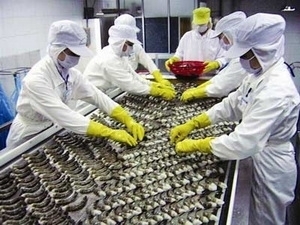 >> Vietnam asks WTO to rule on shrimp dispute with US

VASEP secretary general Truong Dinh Hoe made the statement in response to reports that the Coalition of Gulf Shrimp Industry in the US has filed an anti-subsidy lawsuit against shrimp imports from Vietnam.

The US Department of Commerce (DOC) is expected to give an official reply on January 17 on whether they will launch anti-subsidy investigation into frozen warm-water shrimp imported from several countries, including Vietnam.

Hoe asserted that Vietnam is a member of the World Trade Organisation, and it complies with the WTO regulations regarding the provision of subsidy for agriculture, adding that the country has data to prove its compliance.

He urged shrimp exporters to ready documents and data to counter the accusation, while getting prepared for even the worst scenario when the DOC accepts the anti-subsidy petition.

According to Hoe, if the petition is accepted and Vietnamese businesses fail to persuade the DOC, Vietnam’s shrimps will be subject to a 12 per cent anti-subsidy tax rate. As a result, the price of shrimp will increase and it is the American consumers who have to pay for the extra.

The US was the second largest importer of Vietnamese shrimp in 2012, paying out $480 million or more than 20 per cent of Vietnam’s total earnings from shrimp exports.

Deputy director general of the General Fisheries Department Nguyen Huy Dien affirmed that the government plays an important role in the law suit, which would last more than one year.

This is the second time Vietnam’s shrimp exports have faced a legal barrier in the US market.