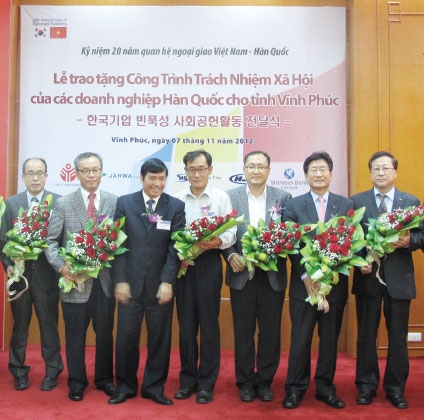 The sum will be earmarked to province-based philanthropic activities like building gratitude houses, rearing and giving medical treatment to children who are Agent Orange victims or funding orphanage centres. Of this, Shinhan Vietnam Bank offered VND1.5 billion ($72,000) to build a kindergarten in Tam Dao district’s Dai Dinh commune.

The Korean embassy in Vietnam, in cooperation with KOTRA and Korean business community in Vietnam, had founded Korean Business Corporate Social Responsibility Council. The council has chosen Vinh Phuc to come up with projects because Vinh Phuc is home to a number of Korean firms and the provincial authorities rolled out many incentives and supported Korean business in CSR activities.

“Korean firms’ CSR activities are not momentary or unique, in the future we will do our utmost to handle these activities more constantly and on a deeper scale with Vietnamese localities,” Korean ambassador to Vietnam Ha Chan Ho addressed the donation ceremony in Vinh Phuc.

Vietnam and Korea share many similarities in culture which underpin incessant development in the bilateral friendship relations of the two countries over the past couple of years. Korea had become Vietnam’s trustworthy partner in Asia, according to Vinh Phuc People’s Committee chairman Phung Quang Hung.

At this time, Vinh Phuc is home to 41 Korean businesses with total committed capital of $240 million, making discernible contributions to the provincial socio-economic development.

Successes of businesses generally and Korean firms particularly are our pride,” Hung said.

“Community-oriented activities of Korean firms as a member in the local community mirrors maturity in the quality of our bilateral relations,” said Korean deputy minister of Knowledge Economy Han Jin Hyun.

He expected 10 Korean firms holding part in the donation ceremony would inspire other 2,700 Korean firms doing business in Vietnam to follow their footsteps in leaving imprints on local community development.

Apart from the donation ceremony embracing Korean firms, participants of the event took part in planting trees for remembrance, marking successes in promoting CSR activities of businesses and government agencies of both countries and those in Vinh Phuc province.

Korean firms in the area have shared the province’s difficulties through their community-oriented activities and this has contributed to cementing cooperation between the two countries, generally and between the province and Korean firms, particularly.

We expect to see closer ties between Korean businesses and the province in the forthcoming time.

Our company will expand its scale and increase the headcount to around 4,500 labourers to create more jobs for local residents. In the meantime, the company will scale up cooperation with orphanages and rest homes.

We are happy to show our support with assistance from the State Bank of Vietnam and the Korean embassy to Vietnam.

The year 2012 marks 20-years of Vietnam-Korean diplomatic ties. The mutual trade value witnessed phenomenal growth in 2011, hitting $18.5 billion, surging 38 times against 1992 and expected to climb to $20 billion this year.

Around 270 Korean businesses have settled down in Vietnam with a total committed capital of $24.4 billion, irrespective of projects which are in the development pipeline.