The Ministry of Industry and Trade proposes lowering the coal export tariff in a bid to help Vietnam National Coal and Mineral Industries Group (Vinacomin) survive the tough times and preserve its credit rating to take out soft loans. 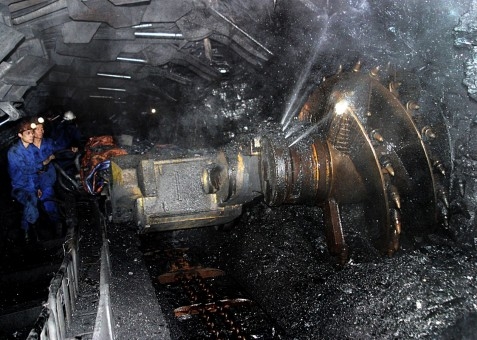 Nguyen Khac Tho, deputy director of the General Department of Energy, under the trade ministry, said the proposal for slashing the coal export tax rate from 20 per cent to 10 per cent is necessary to reduce the huge inventory volume of Vinacomin and avoid affecting the livelihood of over 100,000 coal workers.

“The top goal is to ensure sufficient goal supply for domestic consumption, especially for power generation and only export the types of coal that are not consumed in the local market,” said Tho.

“The State manages the coal industry by export quotas. For example, Vinacomin is allowed to export only 14.5 million tonnes this year, so whether the export tariff was raised to 30 per cent or cut to 0 per cent, the industry could only export 14.5 million tonnes,” he told a press briefing on the production and trade situation in the first eight months.

Export tax reduction will also provide Vinacomin with more capital to reinvest in production and keep the group at the credit rating that enables it to borrow soft loans, said Tho.

The Prime Minister has assigned the trade ministry and the Ministry of Finance to consider the proposal for lowering the coal export tariff and increasing the prices of coal sold to the power sector.

Regarding the petition for raising the prices of coal sold the power sector, Tho explained the current selling prices are equal to only 50-60 per cent of the production costs, leading to the shortage of investment capital for the energy industry.

Meanwhile, the Ministry of Finance has also suggested the Prime Minister to halve coal export tariff to 10 per cent to remove the difficulties for Vinacomin.

In a press release coming out on Monday, the finance ministry said Vinacomin produced 21.8 million tonnes of coal in January-July (14.6 million tons supplied to the local market and 7.2 million tons exported), or 47.9 per cent of the year’s plan.

As of end-July, the inventory volume reached nine million tons, due to shrinking domestic consumption and falling export prices. Vinacomin has reduced costs, but the tariff of 20 per cent pushes up export prices, so the group can hardly export its products.

The finance ministry estimated that if the export tax rate was slashed to 10 per cent, Vinacomin could export 6.5 million tonns of coal in the rest of the year, pulling down the inventory level and ensuring jobs for workers. Moreover, the state budget would gain additional revenue from the export of unsold coal.

Once the market has recovered, and the global coal prices pick up, the export tariff could be adjusted again, said the ministry.

The ministry noted tax reduction is a common trend in other countries. For example, in Indonesia, where 280 million tonnes of coal is exported each year, and Australia, coal exporters are enjoying a zero tax rate.

Even in China, where over three billion tonnes of coal is produced every year, the export tariff is set at 10 per cent. Meanwhile, Mongolia levies a coal export tariff of 7 per cent and Russia imposes 5 per cent.