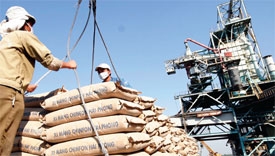 As cement production and consumption in 2012’s first half shed 10 per cent against 2011’s same period on the back of falling public investment and a stagnant realty market, the signing of a cooperative agreement between Ministry of Transport (MoT) and Ministry of Construction (MoC) to boost cement usage in building transport infrastructure in Vietnam was expected to be a life saver.

However, since the signing ceremony in mid March, the proposal has sat on the drawing board and is unlikely to take shape this year.

According to a state cement conglomerate Vicem representative, it would be hard for local cement firms to scale up consumption through putting cement into transport infrastructure projects.

The timeframe for building a roadmap on cement usage at road projects including high-grade motorways to road in rural areas, together with associated parking lots, toll stations and stop-overs shall be completed by December 31, 2012.

Besides, construction experts  supposed hiking cement usage in transport infrastructure would face difficulties since its investment ratio is two to three-fold higher than that of asphalt concrete investment. In addition, capital mobilising scheme and incentive policies promoting cement usage in transport infrastructure projects are not yet in place.

In early 2012 the gap between cement production and consumption has surpassed 10 million tonnes per year, but when cement could be used in transport infrastructure projects remains unknown.