The administration of the northern Vietnamese province of Quang Ninh, home to the world-renowned Ha Long Bay, is considering investments in many megaprojects to improve its traffic infrastructure, including the construction of a multimillion-dollar airport. 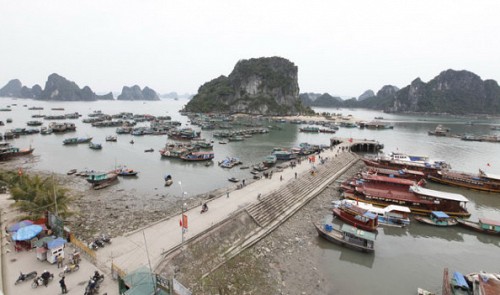 The feasibility study report for the Quang Ninh airport, a VND7.5 trillion (US$349.52 million) terminal to be built at the Van Don Economic Zone, has been approved by the provincial administration, Dau Tu(Investment) newspaper reported on Monday.

The 288.38-hectare airport will be able to serve two million passengers a year, with a runway capable of receiving wide-body jetliners such as the Boeing B777 or those of similar sizes, according to the newspaper, run by the Ministry of Planning and Investment.

The terminal will have two aprons each for Airbus A321 and Boeing B777 aircraft, and will be built under the BOT (build-operate-transfer) scheme.

Construction is expected to be completed in two years, whereas the investor will need as many as 45 years in order to recoup investment, according to Dau Tu.

A group of investors, including Joinus Vietnam Co. Ltd., Posco E&C and Korea Airports Corporations has shown interest in the project, according to Dau Tu.

Quang Ninh will cover part of the VND730 billion ($34.02 million) required for site clearance tasks, which it hopes to complete by the end of this month so that the airport can break ground in April, according to VnExpress.

Provincial authorities have also worked with investors on other megaprojects, including the Ha Long-Mong Cai Expressway, according to the Vietnamese Government Portal.

The 60km four-lane expressway connecting the province’s capital of Ha Long City to Mong Cai City has a total investment of VND11.7 trillion ($545.25 million), and is expected to be built over three years from 2015.

Quang Ninh is also calling for investment in a $4 billion resort complex that will feature a casino in Van Don, according to Dau Tu.

The complex and airport projects play a key role in turning the Van Don Economic Zone into an exclusive economic zone, the ministry-run newspaper said.

The Van Don Economic Zone is located in the eponymous district, which is an island in Bai Tu Long Bay, also a famed tourist attraction in Quang Ninh besides the UNESCO World Heritage Site Ha Long Bay.